It started in the morning – in our QA environment.

Our topology (simplified – there are lots more connected to the LAN switch in the middle): 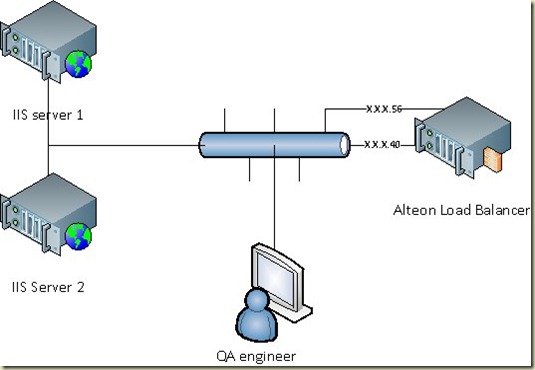 The QA engineer is trying to test web application (installed both on IIS server 1 & IIS Server2) via our a load balancer (Alteon in our case).

Yesterday, everything worked fine.
Today, instead of getting the homepage of the web application, we got HTTP error 504.

Quick look at the List of HTTP status codes in Wikipedia:

504 Gateway Timeout - The server was acting as a gateway or proxy and did not receive a timely request from the downstream server.

Now in English:
The Alteon, which works as a gateway between the user and the 2 web applications says it got no response from the IIS server (either 1 or 2 – or both).

a quick check of the web application – by approaching their IPs directly – showed no problem at all.
They were responsive as usual.

We have asked whether there were any network changes lately, but nobody couldn’t remember any change at all.

A deeper look at the IIS logs showed a request from the Alteon did accepted.
The HTTP response was 200 – which was strange – as the Alteon kept telling it got no response.

We already familiar with sc-win32-status 64. but if you don’t:

The specified network name is no longer available

Which means that IIS got the request submit the response successfully to the network – only to find out it can’t reach the client who sent the request.

In our case, this error says the Alteon can see and send requests to the IIS servers, but the responses can’t reach the Alteon back.

So we changed the IP address of the Alteon Load Balancer – and – Hooray!!! it worked.

We re asked about any change in the network, this time we have specified the IP number…
And this was the real topology: 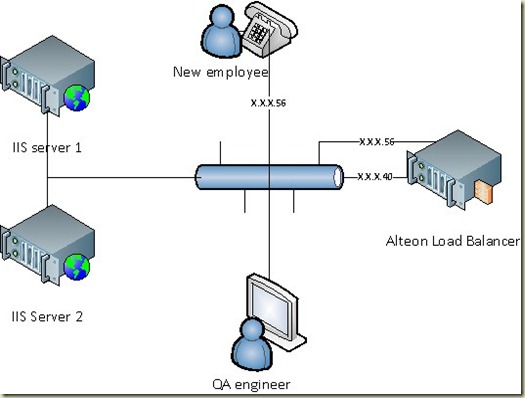 This morning a new employee join the company, and we have IP phones.
The IP Address which was given to the new employee’s IP phone was x.x.x.56…

Posted by Yonatan Leonov at 8:24 PM No comments: Links to this post